Welcome to a darker world of night-things, callous murderers, and secret societies, all contained in sixteen enticing tales of suspense and detection.

Darker Secrets is the second in a series of three books from Planet Logic Press that will contain all the stories in my own personal canon.

Some date back to 1967 when I was a mere seventeen years old, to several tales written specifically for Darker Secrets. The book is available as a paperback and as an eBook for Kindle or Nook.

If you read the prior book, The Clock Tower and Other Stories, you’ll notice some familiar characters returning in Darker Secrets. But even so, this collection has its own eerie identity.

While The Clock Tower was mostly fantasy and science fiction, this book adds the element of mystery with eight stories that focus on detection.

The fantasy element is back as well with a century-spanning vampire story leading off the book, followed by a pair of supernatural themed tales. Two stories have an element of science fiction, and one crosses over into the superhero genre.

The final three stories in the book take place in a run-down eatery in the fictional city of Jamesport. In “Tales From the Strange Café,” you’ll join a literary, male-only, drinking and debating society that exists for the purpose of hearing oddball stories, and deciding on their veracity. Our group, the Wayfaring Strangers, takes on the issues of so-called Brain Warfare, an impossible murder, and the haunting of Texas’ most famous tower.

So order your copy today and discover how many Darker Secrets you can unveil!

Here are some ways to purchase Darker Secrets online:

Direct from the author at Square

From Barnes and Noble

Ask for it at your local bookstore!  Be sure to post a review on Amazon or B&N! 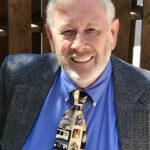 LYNN WOOLLEY is the author of “The Clock Tower and Other Stories” and four books on broadcasting and politics. He currently hosts “Cardle & Woolley” on KJCE Talk 1370 in Austin and the “Planet Logic” podcast. His career has included stints as a radio news anchor in Dallas and Austin, a political writer for The Dallas Morning News, co-host of the Children’s Miracle Network Telethon in the Waco-Temple market, and 24 years as a syndicated radio host. He holds a bachelor’s degree from the University of Texas at Austin.