I should have written this column in 1968. But that was 52 years ago and there was no internet, no web sites, no talk show — no way to tell my story. Except to a lawyer, which I did. So I kept it mostly to myself and my parents, who always believed my side because they loved me and because I had never lied to them. 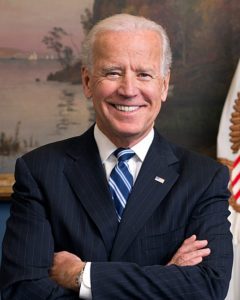 You’ll excuse me if I have a certain amount of sympathy for Tara Reade, the woman who has come forward to accuse former Vice President Joe Biden of sexually assaulting her when she worked in his Senate office.

For the record, I have no idea whether these accusations are real. On Tucker Carlson Tonight, the host presented evidence from both sides – in a journalistic way that would be foreign to CNN. She very well may be a Bernie Sanders plant. But I don’t know. According to the Democrats, all women must be believed.

Tara Reade has more evidence than Christine Blasey Ford did.

Democrats were still smarting from the controversy over Merrick Garland when President Trump nominated Brett Kavanaugh. They were looking to get even. In doing that, they created an impossible standard for any man to ever have to deal with. They proclaimed that all women deserve the benefit of the doubt.

That means that if a man in power – any man – is accused of anything by a woman, he is guilty until proven innocent.

If the Democrats were to stop the Kavanaugh nomination, they needed this standard. After all, they had failed to keep Clarence Thomas off the High Court, and they didn’t want to lose again. Ford had made the accusation – like Reade with suspicious timing – but she had no witnesses. Not even her best friend would stand up for her story.

The Biden case is not about sex. It is about hypocrisy.

Biden may be guilty or innocent; only he and Reade know what really happened. The real story here is that Democrats changed their standard because they found themselves in danger of losing power.

To summarize: Dems were mad about Merrick Garland. Blasey Ford came forward with allegations that they could use to stop Kavanaugh. To make that work, they set a new standard. Now Biden is accused, and the standard has been abandoned.

The standard should be the same for all politicians or powerful men. Whether it’s John Kennedy, Teddy Kennedy, Lyndon Johnson, Bill Clinton, Blake Farenthold, Al Franken, Donald Trump or Joe Biden – there should be evidence and eyewitnesses. The worst of all of these examples – Edward M. Kennedy, who left a woman to die – was flush with facts. But Kennedy walked. There is nothing new about Democrat Party hypocrisy.

What if Biden didn’t really do it?

As a conservative and an opinion journalist, I try to look at all the facts. As a political issue, the Tara Reade affair is all about the hypocrisy of the Left. But if he isn’t guilty, it’s personal to Joe Biden. I would be willing to give him the benefit of the doubt but for three things.

First, the Democrats’ new standard must be applied equally (except on CNN where it will be ignored). Second, Joe Biden is a hands-on guy who likes to touch women and stroke their hair.   Third, there’s the matter of one rather large piece of evidence – the on-air phone call to CNN’s Larry King Live back in 1993. The caller is purportedly Jeanette Altimus, Tara Reade’s late mother. In this call, she describes to King her daughter’s problems with an unspecified senator. If that was indeed Reade’s mother, the call is damning in the extreme.

A tongue can accuse and carry bad news.

That’s a line from “Be Careful of Stones That You Throw” — a song recorded by Hank Williams, Porter Waggoner, and Dion DiMucci. It was written by Bonnie Dodd and tells a story of bad things that happen when people gossip and lie. That’s what happened to me in 1967 or 1968.

It was probably 1968 because I had bought a car (for $100.00) using lawn-mowing money, and I was able to drive it to work. The car was a 1952 Plymouth Cranbrook with a flathead-6 and overdrive. A hotrod, it wasn’t. The car was already 16 years old when I purchased it, and it had a myriad of scratches and dents. If you live in Temple, Texas, you’ll appreciate the fact that it was not powerful enough to make it to the top of Suicide Hill.

The job I was going to on the evening in question was my first radio gig at KYLE-FM, a station located in the 13th floor penthouse of the Kyle Hotel in downtown Temple. It would have been around 5:30 P.M. because my shift was 6 P.M. until midnight. I was eighteen years old.

Sometime after arriving for work, I heard a knock at the door.   I walked out of the control room, and across the lobby to answer the knock. There were two policemen there who proceeded to follow me back to the control room where they accused me of hit and run. Oh, if I only had the names of those cops…

The rest of the story is simple. A young girl had called the police and filed an accident report. In it, she claimed that I hit her car and left the scene. The two policemen had already located my car in the parking lot and had determined that, yes – there were dents that could have been caused by this accident. This was BS of the highest order, and no one bothered to take any paint samples and match them against those from the accuser’s car.

The police believed her and were certain I was lying. 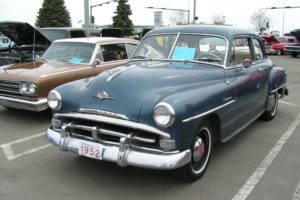 1952 Plymouth Cranbrook. This image, which was originally posted to Flickr, was uploaded to Commons using Flickr upload bot on 17 September 2008, 20:00 by Typ932. On that date, it was confirmed to be licensed under the terms of the license indicated.

This was “always believe the woman” – 1968 style. The thing is – I didn’t know the young lady, and I never hit her car. It looked bad for me, because I had driven through the location where I supposedly had hit her. I always assumed she saw me go by and knew who I was and used me as a scapegoat.

I was innocent, but what could I do? My parents hired a lawyer – the late Ben Cuba – and I explained my side of the story with my parents present. I know they believed me. In the 36 years they knew me, I never gave them one iota of trouble. Did Mr. Cuba believe me? I don’t know and he has since passed on.

The situation was soon over, when the girl and her parents withdrew the complaint, probably not wanting to go to trial with no serious evidence. I wanted her to pay my legal bills, but we all decided not to push it. We’re only talking a couple of hundred dollars, but it was a lot to me then. My car hadn’t cost me that much. But it really wasn’t about the money.

I wanted this girl to stand on a street corner in downtown Temple and scream at the top of her voice: Lynn Woolley is innocent. He never hit me. I made it all up. She never did and I moved on – but I never forgot.

I still have a vague memory of her name, but I won’t use it here. Too much time has passed. I’ve thought of trying to access the Police Department’s records and find out the names of those two officers. I don’t even know whether they have records back that far or if they have been digitized.  I’ve long since given up hope that this young lady, who would be well past sixty today, would come forward to set the record straight. I wish she had done that when my parents were still alive. Even though they knew I was telling the truth, this lying little lady should have fessed up with them present.

She got whatever it was she needed out of the situation and was content to let me dangle in the wind.

I can see my “accident” from the standpoint of both Tara Reade and Joe Biden. From Reade’s point of view, I understand that the passage of time does not bring justice.   I was accused 52 years ago, and obviously, I still don’t have closure. On Biden’s side of it (assuming he’s not guilty as charged), I can sympathize that his reputation may be damaged because of this insane “believe all women” standard.

Back in 1968, the police believed the woman. Not much has really changed.