Before 9/11, before Columbine, America had mass murderers

[EDITOR’S NOTE: We have just learned of another horrible school shooting, this time at an elementary school in Uvalde, Texas. As always, politicians will try to take political advantage. That’s the point I was making in this classic column at a time when President Obama was making untrue statements. Here is the truth: In a perfect world, we could stop mass murderers. In the real world, we can’t.]

Sometimes President Obama is just full of it. 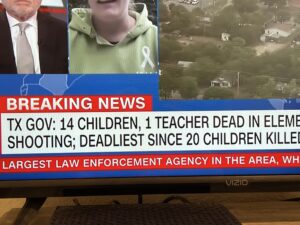 Every time there is a mass shooting in the United States, he tells us that only in America do we have these kinds of events, and he insists on “common-sense gun control measures” as if mass murder is something new and we could stop it — if we just take away people’s Second Amendment rights.

He’s wrong on all counts.

Obama was just in Paris where 130 people were shot in a mass murder spree. In his beloved Islamic countries, there are daily reports of honor killings, stoning, bombings, suicide vest murders and that old favorite – beheadings.

In this country, we’ve had a steady stream of mass murders dating back to the 1800’s. Surely the President knows this.   But the only real truth to him is that that which helps push his agenda forward. So that’s what he does.

Of course, you can break it down into hundreds of categories, but consider these three:

Today’s liberals often place the blame on guns. Politicians like Obama and Hillary Rodham Clinton espouse an undefined policy of “common-sense gun regulations” that they tell us will solve all these problems. They seem to think that mass murder is a new phenomenon brought about by the proliferation of guns and right-to-carry laws. They are ignorant of history.

Here’s a look back at mass murder in America before 9/11 and before Columbine.

Here is a sample – by no means exhaustive – of mass murder in our country. All the following occurred prior to 9/11 and. Most of them, in a time when politicians did not politicize such events as they do today.

There have been other shootings and mass murders in addition to what you see here – but the list is a stark reminder that mass murder has been with us for generations.

Note that most of the people on the list were mental cases of some sort – category 1 from our “3 categories.” Several were homosexuals who lured and murdered boys, and at least one was a female hater. Some of them, like the Unabomber, Bill Ayers, and Timothy McVeigh, were domestic political terrorists – our Category 2. Up until 9/11, there wasn’t much reporting – if anything at all – regarding Jihad in America.

Jihad is here now, even if the political left doesn’t want to admit it. And mass murder has been here for much longer, even if the political left doesn’t admit that either. The left tells us that America is the only place in world that experiences this type of violence – and that’s not true.   They want us to believe that it’s a new, modern-day phenomenon that is occurring because more people have guns – and that’s not true!

They refuse to admit that the one type of mass violence that we could control is Category 3 – jihad against America. Take a look at they list one more time; see if you can spot any instances that might have been prevented by “common-sense gun control measures.” The people we listed are monsters. No matter what the law, they would have killed.