After 500 Days on the Job, AG Barr has PROTECTED Deep State

Sessions and Barr No Different

Jeff Sessions was Attorney General for 637 days. Today marks William Barr’s 500th day on the job. Aside from Sessions’ decision to recuse himself from the job, there is little to no difference between either man. Sessions never indicted one Deep State criminal; Barr still has not.

As a result, in more than three years since Donald Trump’s inauguration, the Department of Justice (DOJ) has failed the American people. Crossfire Hurricane is the biggest political scandal in U.S. history.

Throughout Sessions’ tenure, Trump derided him on twitter. Trump supporters denounced Sessions roundly. However, Barr continues to get a pass from both the president and said supporters.

In short, Barr is far more politically savvy than Sessions. He knows how to tickle the ears of conservatives. This buys him time and cover from accountability.

For example, Barr testified before a Senate committee less than two months after his confirmation. In one exchange, Barr said he thought, “spying did occur” against the Trump campaign and later administration.

As a result of uttering those three words, Barr injected conservatives with all the hopium they needed. For Barr, he secured the good will of those wanting justice. They insisted he was the right man for the job.

However, they ignored the words Barr used immediately after that. Among other things, he stated his concern was whether the spying was “adequately predicated” and that he wasn’t suggesting it “wasn’t adequately predicated”. He also said he was not going to “launch(ing) an investigation of the FBI”. In addition, he referred to “rules” at the FBI (not laws) and “failures” instead of criminal behavior. He further declared his total confidence in disgraced FBI Director Christopher Wray.

Any honest examination of Barr’s second tenure as Attorney General (his first was in the latter stages of the George H.W. Bush administration) reveals far more of what he hasn’t done than what he has done, unless you’re talking about what he’s done to protect the Deep State.

The American people should also hold Barr accountable for the riots in the wake of the death of George Floyd and the crashing of the U.S. economy.

Since 2020 began, the media has focused primarily on three things:

In each case, the mainstream media – which is an arm of the Democrat Party – has not just pushed the Democrats’ far left-wing agenda. It has also ignored the scandal that Barr is supposed to be investigating.

The bombshell revelations about how Flynn was railroaded is a prime example. As we learn that Flynn was a victim of a spy campaign conducted by the Obama administration, the media ignores it. At best, it refers to it in terms of a conspiracy theory.

The media carries out its marching orders to insist people stay home, businesses shut down and people wear masks in public places.

When Floyd was murdered by a Minneapolis police officer on video, the media fanned the flames of the ensuing riots. It lit the match and kept pouring gasoline on the huge bonfire it created.

Then the riots died down. Not only did the media arms of the Democrats pivot back to the China virus but they doubled down, insisting that masks should no longer be an option.

Barr has done nothing about Crossfire Hurricane except protect the Deep State.

There is one thing that will get the media to cover the real scandal.

Barr could announce indictments today and the media would go into damage control. It would drop the virus from its headlines. Ditto the riots and tearing down of statues. Indictments would force the media to defend an indefensible position.

Instead, Bar and Durham slow-walk this investigation as the country burns, both literally and figuratively.

Trump’s AG seems to be intentionally trying to undermine his chances. 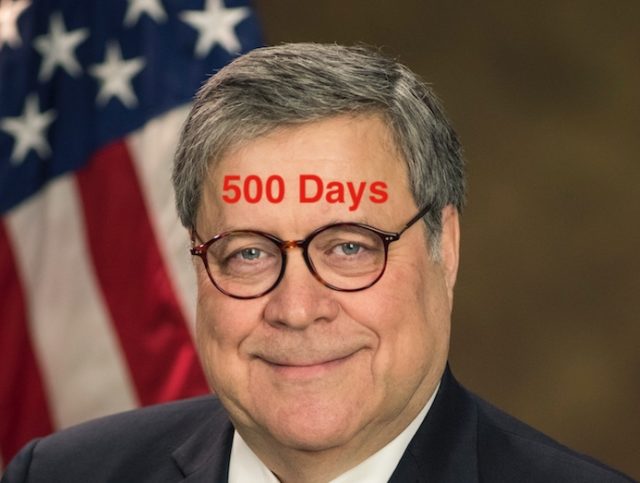 After 500 Days as AG, Barr has not indicted ONE Deep State criminal (photo via Wikipedia)